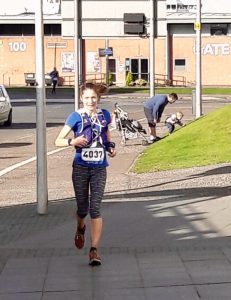 This caught my attention as soon as I’d seen an advert on Facebook, a really different race with the additional challenge of a new distance. The event video and description had me hooked from the word go….

“Sets off with a Braveheart charge down the Royal Mile. Weaves through streets, alleyways, onto hills, up crags, past monuments, museums, seats of Royalty, Government and up and down 3000 feet of ascent and descent.”

I love Edinburgh, so a chance to have a guided race around this beautiful city seemed too good an opportunity to miss. Registration was on the Saturday 08:30-10:30 at Murrayfield stadium, the finish line. I’d booked into a hotel minutes from the start beside St Giles Cathedral on the Royal Mile (so that I didn’t wake all my family up at some ungodly hour to first have my pre-race porridge, then leave v early to get to the start in time!) It’s unusual to get a night away from my kids. Unfortunately, I was far too excited/nervous to fully appreciate the peace. The event organisation was well recommended and the spectator guide was so detailed that even my family were excited to plan their day around supporting me.

I woke early to eat my porridge, the hallowed 2 hrs before the race and arrived at the start at 06:50. The streets were dark, the sun barely touching the sky.
The race starts at 07:30. I was all too pleased to bump into Alex Collins while we were putting our bags on the baggage bus, it seems you can’t do any race without bumping into fellow Striders! By 07:20 we were called to line up before the start….I made a quick dash for the cash point. I’d somehow forgotten the mandatory kit requirement to carry £10 cash.

The place was amazing, barely just gone sunrise. The sky had an orange glow lighting up all those wonderful old buildings and cobbled streets. There was a palpable buzz of excitement. The promise of some excellent adventures ahead.

The start was a bit of a manic race down the Royal Mile. Advice from Jules had me holding back. She’d told me to be sensible, don’t go out too fast and I could look forward to catching them later! All too soon we were heading up past the Scottish Parliament buildings and up the hills and crags of Holyrood Park. The views were amazing but also quite daunting as you could see all across the city to the Pentland Hills…our big climb of the run. Their heads were covered in cloud and loomed ominously over the city.

This has got to be one of my absolute favourite runs. The varied terrain, the views, the relative solitude of racing in a large city. After that mad dash down the mile, the people spread out. I was running alongside a group of about 5 men from then until the last check-point…at which point I left them behind as I’d caught sight of a girl! 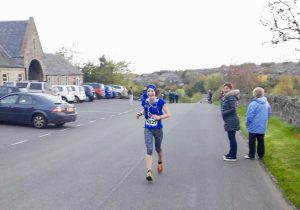 We passed through 800m long tunnels covered in graffiti, with the sound of our footsteps reverberating off the walls. We climbed up through forest paths, across fields akin to cross-country mud! Past Craigmillar Castle, weaving through and up Blackford Hill past the Royal Observatory. Along canal paths, river paths, by farms, up past the dry ski slope, up, up, up to the three Pentland peaks, with warnings to be mindful of the Highland cows, down past a loch, through a forest and back into the city, around 200m of a sports track….but again it wasn’t long before we left the urban terrain behind and hit the tiny trails that criss-cross throughout the city. Past the zoo, on up Corstorphine hill then down to Newhaven Harbour and onto the waterfronts of Leith. Again back along ‘waterway of Leith’ pathways (there were a lot of these) and up to finish in Murrayfield Stadium. It was quite magnificent. The views, the terrain was so varied it was just exceptional.

I knew it would get hard, I’d never run 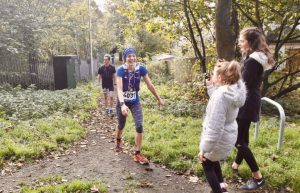 over a marathon but the absolute pleasure of running through Edinburgh but seeing it in such a different light…we passed through the grounds of the Scottish Gallery of Modern Art, ah I just felt lucky to be alive. My legs ached from 27 miles but my spirits were lifted when my little support crew popped up every 10k.  I had no idea of my position through the race. Marshals were encouraging but at no point told me where I was in the field. The start was a mad dash and I hadn’t registered who I was running with. I just concentrated on keeping a comfortable pace that perhaps I could maintain for the distance. My surprise when John turned up at the final checkpoint and said (with surprise in his voice), “You’re doing well…no I really mean you’re doing amazingly well…we think you’re 3rd lady and well up the field. Keep it up and we’ll see you at the stadium.” That was exactly what I needed to keep going for those last 6miles. From being sensible, it was now a race to maintain and keep the fourth lady at bay.

When I finally crossed the last road (there were 20+ quite busy road crossings) and turned down to see the stadium, I let out the biggest cry of joy and startled the nearby runner. The finish was great, trackside in the stadium with our names called over the tannoy and the few supporters (maybe 30)…but who cares when my fab four were there cheering me in.
It’s a long way, it’s quite a battle. Aerobically I felt strong…that was the plan, the terrain and climb does take its toll though and my legs were telling my head to stop. Good job my head is too stubborn to listen! 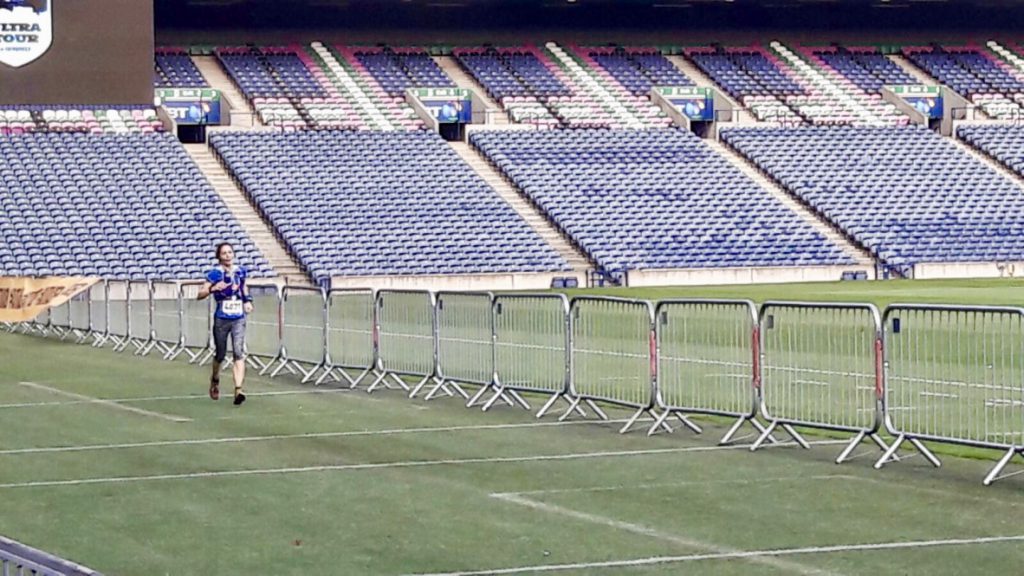 I loved it, over the moon to finish 13th overall and 3rd lady. It’s pricey but incredibly well signposted and the marshals are all brilliant. I’d highly recommend it…even just to explore a different side of Edinburgh. And my husband told me afterwards, “It’s a real shame you’re not slower as that supporter guide was really lovely and we could have enjoyed a great day out in Edinburgh if we hadn’t have been trying to catch you”!