Almost exactly a year ago to the day that I ran Windermere (my first solo official marathon) I was coming back from a number of ongoing niggles and injuries, I wanted to get faster but had fallen out of love with running after training for Dark Skies which I ran through the night with Gareth and storm Katie in March 2016 (my first realllly long race – 26.8 miles round kielder – I like to make things easy for myself!).  I hated the feeling of ‘having to run’ during training and hated the fact the injuries were also stopping me enjoy running.

I asked Anna Seeley (coaching co-ordinator) for a training plan and we met to discuss where I was at, what I wanted to do and what my running habits / preferences were, she designed a really flexible, simple, yet effective, plan for me to follow and I saw the benefits being realised pretty much straight away, I got my mojo back, niggles were kept at bay and the PBs were falling until one fateful shopping trip when I treated myself to a new pair of trainers because ‘they looked good’ and ‘matched better’ (DOH).  Soon after I developed heel / foot issues which was diagnosed as plantar fasciitis. I was in a lot of pain and spent a number of months and large sums of cash trying to resolve the issue.  I ‘water ran’ to nelly the elephant (thanks Katy Walton for the tip and loan of the float) and followed various stretching, PT and Pilates regimes in an attempt to fix it & not lose too much fitness but it was taking such a long time to heal I was struggling mentally and physically.

Thankfully I seemed to turn a corner in the last few months, I couldn’t say exactly what made the difference, probably a combination of everything but I was finding my fitness was coming back & I was able to chip at a couple of my PBs again without the foot flaring.  I was entering local longer runs and doing them as a run walk strategy to minimise injury flaring (Leas Marathon- did 20 miles and loved it) Locke park 20 was a fab day out running in circles with some of the purple posse and I was organising some regular Sunday long runs with a variety of folks.  Before I knew it I realised that I had sort of been doing an informal Marathon training plan without any ‘have to’ feelings, I was loving running again and had had none of the pressure of following a rigid plan!  On the back of this realisation and the high of my Blackpool half pb I floated the idea of running a low key marathon sooner rather than later and suddenly we were booked for a weekend in the lakes with a Windermere entry in!! Not a fast or flat course – in fact probably more challenging than keilder but it would be during the day, I wouldn’t have to carry ‘full kit’ and I very much hoped storm Katie or any of her mates wouldn’t make an appearance 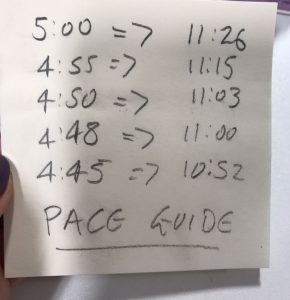 With Anna’s input I had decided on a run the flats / downs and walk the big hills strategy to minimise injury / foot flaring.  I had never ran over 14.2 miles alone before so this was big for me but I was excited as much as I was nervous.  Gareth had decided to enter too as he had unfinished business with Windermere- his first ever marathon which totally broke him! He wanted to right that wrong of a ‘terrible’ performance (no gear and no idea) which culminated in a 3.07 first Marathon time (if only ha ha) so we both had challenging goals we wanted to achieve.

I had set my ‘if only’ at 4.45 and sub 5 as a ‘must do’ Anna said she thought I should run to feel and I might surprise myself, but I was too worried about hitting the wall and bailing into the hotel pool & spa at mile 20 (that’s where our hotel was on the route) or being over taken by a penguin (Mike Parker I blame you for this irrational fear ha ha) or having pull out because of injury so I decided to aim for approx 10.55-11.15mm and take it from there. 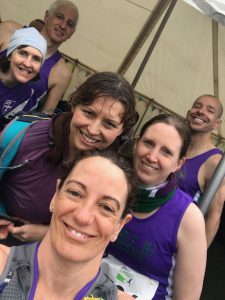 As we squelched over to get our numbers I noticed that the t shirt was purple & white, and they had a ladies fit (I am normally swapped in race tees) so I felt this was a sign! I told myself I would be achieving my first solo marathon & bought the tee as my motivation / reward! 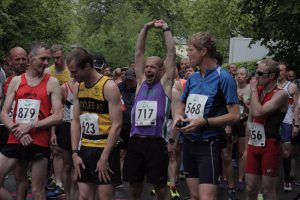 Obligatory strider selfies done we followed the marching band to the start, it was rather emotional and exciting, the day was starting to brighten up and we all wished our purple club mates good luck as we lined up, Gareth and Elaine moved up to the front, Gareth was definitely feeling relaxed as the start line picture shows ha ha

The gun went, the band start playing and we were off! This was it! More emotion as the crowds clapped and called out good luck wishes…. internal pep talk with myself & I settled into my pace, glanced at my watch, going too fast! Must slow down, got 26 hilly miles to go! I had decided to run with average pace set as that way I wouldn’t panic about the walks slowing me down or start racing to bring it back in line, I had used it for Blackpool half so felt confident that would be a good plan for Windermere too. First mile ticked off going too fast! Feeling good but 25 to go! The first hill loomed and I had the dilemma of the walking this early what would people think?? then I reminded myself this was my race & I had a plan for a reason! I wanted to get round in one piece and I wanted to recover sooner afterwards injury free so I slowed to a pacy walk, I was the first but others copied, I glanced at my watch, average pace hardly changed, still too fast, another mile ticked off.  This became my routine & I was absolutely loving the run, I felt strong as I moved up the miles, pace was still faster than any of those I’d predicted / planned to aim for – I was walking the hills and making the most of the flats and downs, I took time to hydrate at all the stations and kept up fuelling with chia charge flap jack as well as gels & shot blocks.  A good couple of miles were breezed though ahead of pace as I distracted myself trying to get chia seeds out of my teeth!

The marshal support at the drink stations and throughout the race was amazing as was that from spectators in the villages – I took time to say thanks and smile (I was pretty much grinning all the way round) and high 5’d the scouts who were cheering us on next to a purple cow! Resisted the urge for a purple cow selfie (THAT TOOK GREAT WILLPOWER) 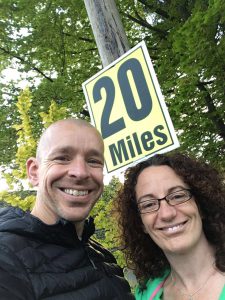 I chatted to folks on the way some joined me on the walk bits but then dropped off as I picked up the pace again on the running bits – pace still to fast! I was worried that the wall or the penguin moments would happen or that the hydration fluid might decide it didn’t like me but I still felt great  cautiously optimistic! I passed our hotel and mile 20 & was smiling rather than wanting to bail, just 10k to go, I’d got this! It was soon after that Malcolm gave me a shout out a marshal point – he had had to pull out because of his knee, that made me sad but also more determined, I thought of him, Mandy & Lesley, people who couldn’t run at this time and would give anything to swap places and dug deep!

Gareth and I had driven this last section so I knew what was coming I knew we had icecream mountain ahead (big hill with an icecream van at the top) I seemed to be getting even quicker!! I dared to think that my 4.45 dream could be a reality! I didn’t appear to be hitting the wall, I continued with the hydrating/fuelling and run/walk and before I know it I was up & over icecream mountain, picking somewhat broken folks off along the way, I checked they were ok as I ran passed giving words of encouragement – I remembered Gareth telling me that was where he’d seen lots of folks struggling in his first Windermere attempt. 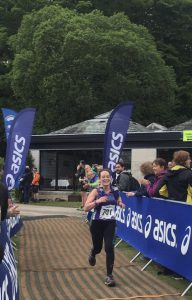 Last water station ahead, something cold, pink, rather sticky & delicious as my last fluid intake & off I went, chatted to a guy who said he didn’t think he could make it – I encouraged him to come along to Mile 25 with me & he did for a while, but dropped off as we came to the last mile. Checked watch something like a 9.53 min mile?!? Oops!! Still way ahead of average pace I had planned beautiful views of the lake I was feeling good but one thing that was messing with my head was the fact my watch had lost distance so I wasn’t displaying the same as the mile markers, what ifs kicked in….  I missed the 26 mile marker somehow (there were ALOT of luminous yellow signs) so I wasn’t sure what I had left to go, the last push to the finish is not fun at all it’s twisty turny, a drag followed by proper uphill – none of us enjoyed that section! But then you round the corner and it’s the down hill of the finish funnel to cross the line, I sprinted, glanced my watch, didn’t dare to believe it! Heard Gareth and Anna shout out, I’d done it!! 4.37.19!!! I’d earned my purple tee and exceeded all of my expectations!! I was over the moon! Anna came over to say well done and tell me that Gareth and Elaine had won prizes & id made it in time to see them – our Marathon day was totally meant to be! 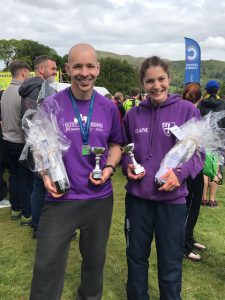 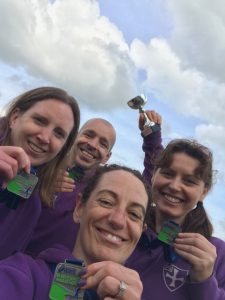 Thanks for reading! I would highly recommend Windermere as a challenging but low key road marathon with the joys of the enthusiast marshals and spectacular views to distract you from the hills (definitely not on the fast/flat list!)