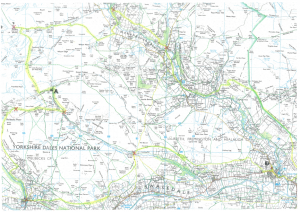 The Swaledale Marathon like any decent run ends up as a story. This will be the story of how I started full of energy, in a rain jacket with a pack full of gels and water and ended up exhausted, sprinting through Reeth and soaked to the skin in just a Striders vest. However, if you ask any who ran or spectated that day they will give you their stories; most of those are shared with friends such as Camilla and Kathryn, Tim and Phil or Gareth and Stephen and many others. While I rarely ran with other Striders I made many friends who shared my struggle and who while I might never know their names I shall never forget. 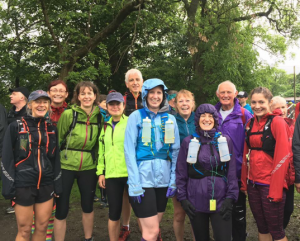 Swaledale might not be on the FRA calendar but it has one thing in common with the fell races I have ran…it started with a long, steep and painful ascent. This was towards Fremington Edge and while I had told myself and others before I would stay with friends (Jon and Elaine were the ones I was thinking of) I found that my regimen of strength and core training meant I floated up the hill. I looked into Jon’s eyes on the way up and knew that I was too strong to hold myself back. What had felt like a tough start the year before seemed like a jog down to the shops for milk and so I struck off on my own ahead into a windy and rainy new adventure. 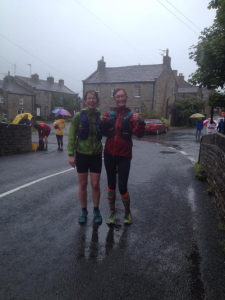 Stephen, Michael and Gareth had gone off in their triumvirate but I became the fourth strider running with a group across the top of Fremington and down into the next valley towards Whaw. An increasingly terrifying gap behind meant that the little group I was in became my new comrades and I had to keep the legs turning over to keep up. It wasn’t difficult but I always feared for later as I had barely held onto consciousness last year in the final mile and didn’t fancy going through that again. I kept up through the valley and up towards Great Punchard Head where we lost a few on the climb, at this point I was with a few other men and the first lady (checking the results her name was Amy and she ran for Rugby and Northallerton). She floated up Punchard…I don’t think I ever saw her walk and we were together for 12 or so miles including all the hard work up Great Punchard Head. I ran almost all that uphill as well with only short stops to walk and make sure I didn’t get ahead as I hadn’t recce’d Punchard as thoroughly as possible. 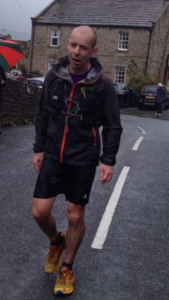 After a while we made it to the bog and I am not sure how any of us made it through that mass of muddy holes and collapsing paths. It had been raining pretty consistently since the start of the race and by now we were all sodden and the coarse was soaked through from current rain and that in the week before; wet bog is a beast of its own but we fought through mile after mile of tough track and a few self-clip points later and one manned clip point we came to the last self-clip on Punchard. My group had whittled down to myself, another guy who seemed nice and Amy (who glided as if on road). She later told me at one point it was her second time doing Swaledale and that she was a road runner by trade. Considering her nav (thumbing the map as she went) and her strength I would recommend a change of focus. Anyway we reached the final self-clip on Punchard to find a very wet looking group of three clipping at which point Michael turned around and greeted me. We had run the fell so well that we had caught up to Michael, Stephen and Gareth apparently.

This was the start of the downhill towards Gunnerside and when I said to my new friend that these three were some of the fastest in my club she turned to me and said only “you have them”. Encouraged by this I quickly over took Gareth who was busy writing a determined story of his own (albeit maybe not the happiest of tales). When the navigation went a bit awry I took the rest of them and went down towards Gunnerside. While there I did the manned clip and started tactically stripping…I was too hot in the rain jacket and the rain was down to a mere drizzle for the first time since the start of the race. My new friends left ahead and I was left with Michael, with Stephen and Gareth behind. Michael and I started the uphill out of Gunnerside and he stayed with me for a bit until I said something like “Michael, I have run the race of my life but there is not much left and I know the rest of the route…leave me, I will be fine”. So hesitantly he did. 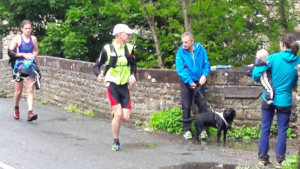 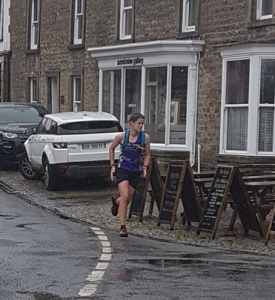 I don’t know how I got through the rest of the miles but I did. I thought I could see Michael’s luminous jacket ahead although it turned out it was someone else and he was actually well ahead overtaking everyone and their mothers. I ran as the rain and wind came back to lash at my Strider’s vest. I fell after surrender bridge while in a small gulley and just remember getting up and thinking that I couldn’t stop. My leg had cramped but I though hiking out of the gulley would stretch it out. I was in a bad way at this point with no strength left although I was fairly conscious at least. 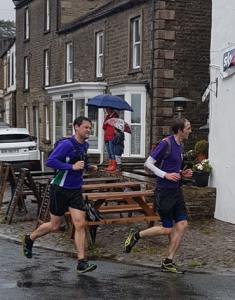 I kept going and after seeing Jan’s husband I made my way down the lane of loose rocks with the last self-clip and came out into Reeth where a small crowd with a few cheering Striders (Joanne and Lesley come to mind) coaxed a pseudo-sprint out of me. It felt like a sprint to me but for all I know it could have looked more like a waddle. Everyone else turned up in layers at the least and mostly in rain jackets but I must have looked a sight in only shorts and a soaked vest. I got to the finish line, gave in my card and went for food. I had finished 14th in 3 hours and 36 minutes. 7 minutes quicker than last year in much worse conditions and 37 places higher. With food I sat down and made merry…job done.

Well done to everyone who ran a tough and wet Swaledale this year with a special mention to Michael Mason (6th), Elaine Bisson (3rd Female) and the Men’s Team (2nd). An honourable mention to everyone who spectated as well who waited in the rain while we had all the “fun”. 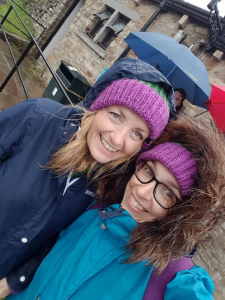