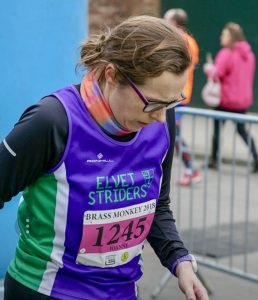 Everyone who knows me knows that I don’t like distance. In fact, I’m pretty sure most of you would say that I don’t even like running. So when I found myself up at 5.40am on a Saturday in October, in a queue for a queue for a place in the 2018 Brass Monkey, I did wonder what on earth was wrong with me.

I hadn’t got along with distance in the past – I had done the Great North Run in 2016 and it hadn’t gone at all to plan. Looking back, I wasn’t ready. I thought I had trained enough, but I was vastly underprepared for the mental strength that would be required. I completed it, but I hated myself, my life, running, the world etc. etc (always the drama queen). I remember seeing my Dad at the end and just collapsing into his arms in a big snotty blubbering heap, vowing to never run another half marathon as long as I lived. I was gently persuaded to try the distance again at Brass Monkey 2017 to see if it was the distance that I didn’t like, or if it was just that particular race. I, unfortunately, picked up a chest infection in November, and couldn’t train much at all, but to be fair, I had no intention of racing it, and I knew I could complete the distance. I did; in exactly the same time that I ran the Great North Run.

Fast forward to October 2017 – fate had got me a place in Brass Monkey again. I was determined to train properly and give this a real try this time. My times had been improving over the year, gaining good PB’s over 5k and 10k – I could do this. A good friend had been giving me lots of advice and support and constantly encouraging me to have a little faith in myself, and in my training. He even convinced me to run Gibside Fruit Bowl and Loftus Poultry Run, as the hills would be good training. (Our friendship almost didn’t survive the joys of Gibside).

Due to some personal circumstances I had been struggling a little with my mental health and had been signed off work for quite a long time to try and work through them. Training for this race helped me in a way I can’t even describe. Having a goal to focus on, gave me a reason to get out of bed. But it also stood in the way sometimes and convinced me that I was kidding myself, that there was no point even trying.

In my heart, I knew I was capable of a PB, having run the previous 2 attempts in 2:23:59. I wanted to dream of sub 2 hours, but I just didn’t think there was any point. No way could I sustain the required pace over 13.1 miles and I so desperately didn’t want to be disappointed. So I admitted to myself that I would be happy with sub 2:05, which would have been a nice 18 minute PB.

I drove myself down to York instead of jumping on the Strider bus. I wanted to remain slightly incognito so that I could focus properly. A little warm up and then off to the start. I positioned myself behind the sub 2-hour section and waited with more nerves than I have ever felt.

The plan was to run 5k easier than race pace, then 10k at race pace and the final 6k with everything I had left. I was nervous that I would become too comfortable with the easy pace, and not be able to pick it up when I needed to, so the plan kind of went out of the window 1km in. I felt good. My pace was slightly faster than race pace, but it felt comfortable. I saw Allan, Lesley and Graeme and a selection of Strider children, and I actually smiled and waved – never been known. I saw Catherine around 6k and tried to keep her in my sights to keep me going, but at the second water stop, she took some kind of super gel and went off like a whippet.

So feeling good lasted a while, I was enjoying myself but trying not to get too carried away, listening to people around me chatting with their friends (and wondering how they could manage it). I started to slow down around 16k – there is something about hearing “only a parkrun to go” that just messes with my brain – it’s not comforting to know that! I was very aware that I had slowed down and tried to push a bit more, but I had nothing left. Perhaps if I had followed “the plan” I may have had something left, but alas, all I could do was my best. I had never managed to run the entire distance without stopping for a walk, so my next goal was to make sure I didn’t stop, even though a lot of runners around me seemed to be defeated by the “hills”. I was actually thrilled to see the “hills”, it was a nice change from all the flat (this is now on my ‘things-I-never-thought-I’d -say’ list) and I managed to lose a few people so I think I will thank Cross Country experience for that!

Running down into the racecourse felt amazing. I knew I was almost there. I had nearly done it – I didn’t look at my watch, I knew that I hadn’t managed a sub 2 but I had no idea by how much, but it didn’t matter now. I had run the whole way, I had mostly enjoyed it, and really soon I could stop!!! When I think about the finishing straight now, I get goosebumps. A collection of Striders were at the front and they were all I could hear – their roars of support brought out the last of what I had left and I sprinted as fast as I could to the finish, overtaking around 5 runners (Michael, Lesley, Stephen and Matt – thank you so much). My official time came through as 2:00:57. Nowhere near as far over the 2-hour mark as I had convinced myself, and a massive 23 minute PB.

But this, of course, means I will have to do it again next year….