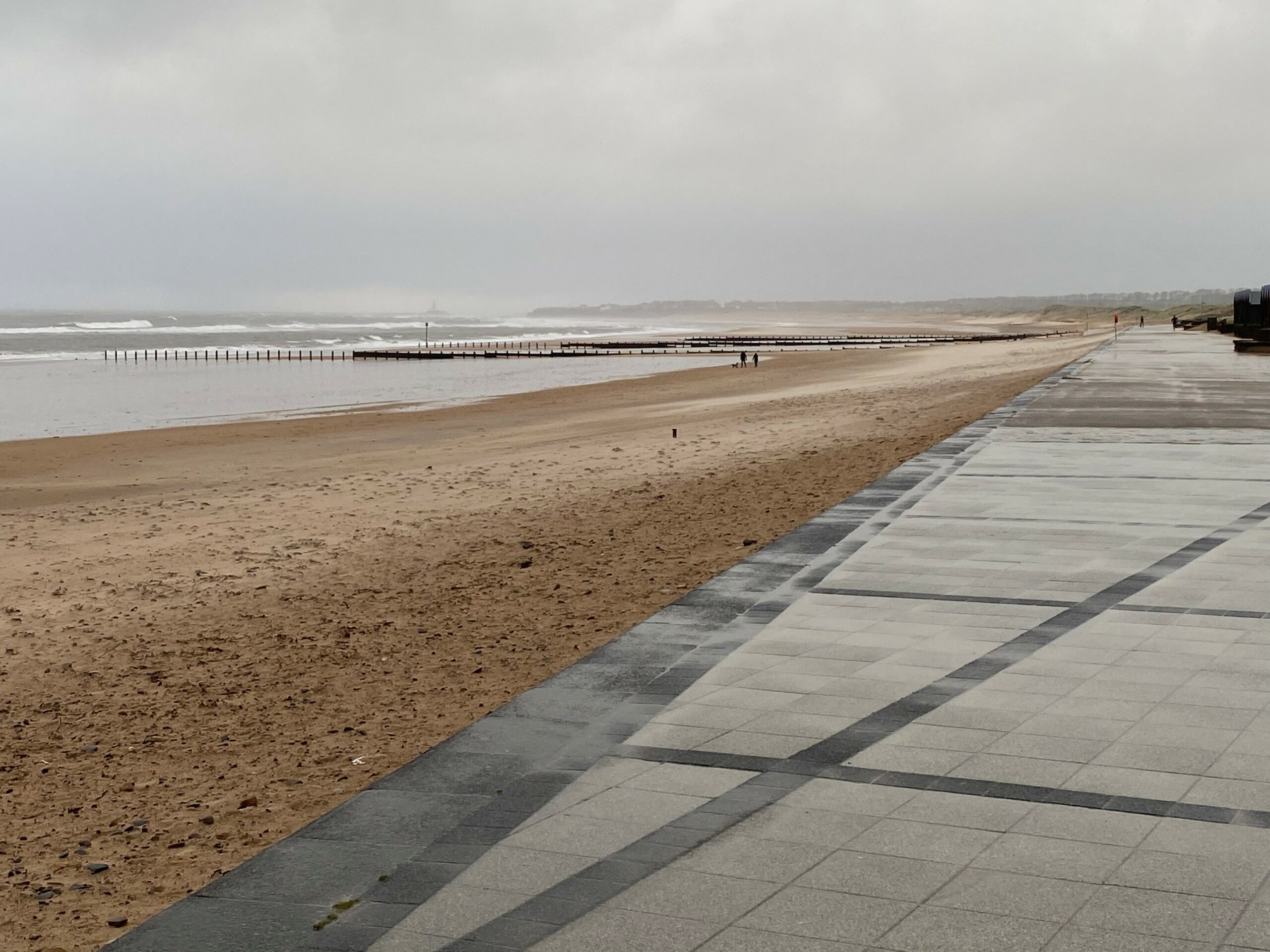 Five intrepid Striders made their way to Blyth on Sunday for the 61st Blyth Sands Race.

Always run on the first Sunday in December, this historic race uses its own unique handicap system. The older and wiser age groups going off first, followed by the younger whippersnappers released at varying intervals chasing down the early starters. Gradually the race unwinds as the runners make their way along the beach from Blyth to Seaton Sluice and then back the same way. ‘Blessed by winter sunshine and not even a hint of a breeze…’, this race was nothing like that! It’s fair to say that the weather was lousy, with very strong northerly winds running parallel to the coast accompanied by driving rain. Lovely!

Heather Raistrick and I arrived in good time to register at the event control at the RNLI building, and then retreated to the car to get ready. Just simply dashing across the car park resulted in a thorough soaking. On our return to race HQ, we found Allan Renwick, James McNaney and their friend Paul Stockil, huddling for warmth and shelter in the entrance to the toilet block. The good thing was that whilst chatting and discussing the aged related handicap, Allan thought I was younger than he was, which was a bonus, but not likely to change the result of the race.

Heather was due to run at race start plus 3 minutes. From the comfort of 200 meters from the beach in the lee of the lifeboat station I observed her make her way to the start. As they set off I saw that everyone was running north along the beach for about ½ a mile before turning around to run south towards Seaton Sluice. The amazing thing was that once they set off they were hardly moving with their bodies angled at 45 degrees running directly into the wind and rain.

I was starting 6 minutes later and made my way down to the beach and was immediately hit by the force of the wind. The marshal at the start called the over-55 men forward, and asked for our birth certificates for proof of age. I told him I had a note from my Mum confirming I could be excused from PE today. ‘Get on with it’ he replied. The blast of the whistle to start was lost in the wind and we set off up the beach into the gale. It was hard work plodding in to the wind, especially when we had to crawl on hands and knees under the first obstacle, a sewage pipe.

After grinding out the first half mile we turned 180 degrees around a flagpole, with a marshal hanging onto it for dear life, and then turned to run south. This was transformational with the wind now on our backs and helping us along the beach south at a fair rate of knots. But that doesn’t mean things became easier!

Three or four rivers cross the beach at various points, with varying widths and depths, along with a number of groynes and various beach debris from the storm.

As the tide was just starting to come in the beach was good to run on, but I saw a couple of runners in front get caught by crashing waves from the incoming tide which slowed then down and enabled me to overtake.

At this point Allan came storming past, full of his usual encouragement and gradually pulled away. I was pleased to be able to keep sight of him for some time. Having negotiated a couple of the rivers with no problem other than wet feet, I saw a wide fast flowing torrent cutting across the beach at a 45 degree angle. A few people were trying to cross this with varying degrees of success. Some were up to their ankles in water, some with water above their knees. The right line to take was important to our survival. Allan took tentative steps into the water, then he seemed to get deeper and deeper, stumbled a little and the next thing he fell forward full length and submerged into the raging torrent. He hadn’t taken the right line and was now taking part in a running / swimming / survival race! Having witnessed this escapade, I took a different shallower route and got through with no problem, thanks to Allan’s trail blazing on our behalf.

The southerly route along the beach was now really fast due to the northerly wind and the super speedy James passed me as I approached the turn around point at the end of the beach at Seaton Sluice.

By this point many runners were now running the two miles north back to the start, and it was clear from their pace and grimaces that the race was about to become a bit tougher. I turned at the flag and headed north back towards Blyth. This section was tough. Running into the wind on the beach was simply hard work and I worked on putting one foot in front of the other and grinding it out. Brutal conditions!

I saw Heather about 100m ahead, but it took me ages to slowly catch up and pass her as she was running strongly and with gritted teeth. Over the final half mile we had a couple of groynes to climb over, which were made that bit harder by the fast flowing streams running next to them, although a couple of marshals were there to assist in the event of being swept away. Some people were swept away!

At last the end was in sight, but even with the added motivation to finish well, the wind was still fully in my face making things a mix of psychology of the mind and sheer effort.

Altogether a good set of results for Striders under tough conditions, plus an experience not to be missed.

This race has traditionally been a part of the club Grand Prix series, with a good Strider attendance, even necessitating the organization of a club bus. It would be great to return next year with a strong team and a have shot at some of the individual and team prizes.

The handicapping system used is as below: