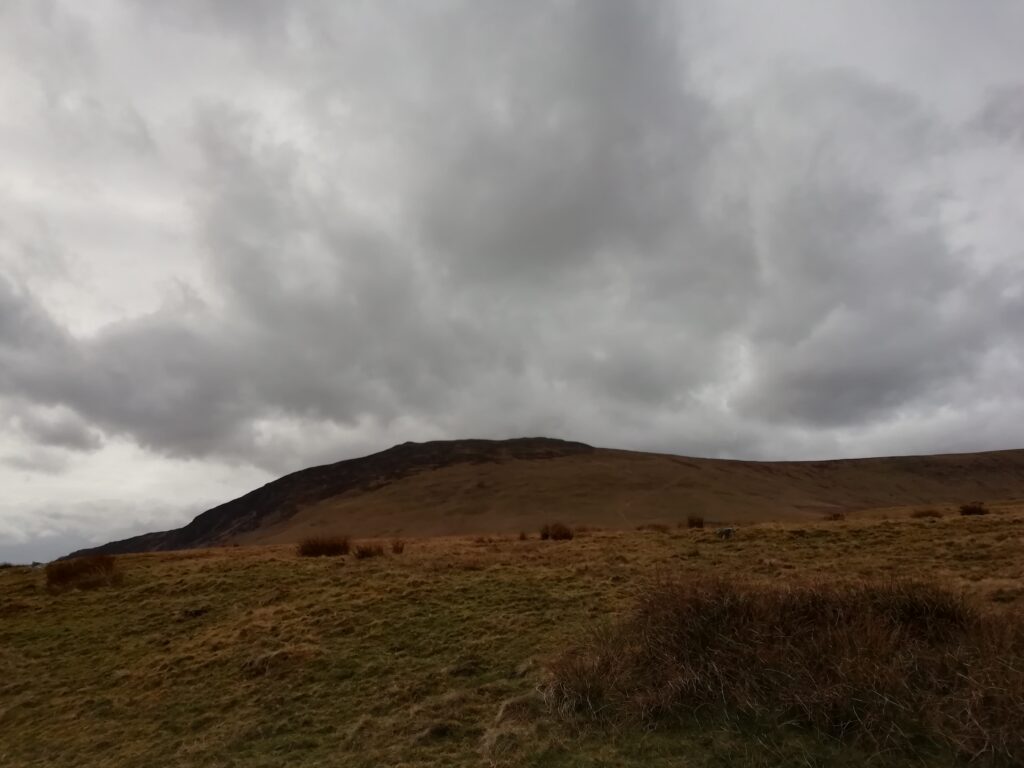 After running a number of parkruns and slowly improving my times this year, this led me to attempt a couple of cross country runs, Durham and Alnwick, both of which, although tough, I enjoyed and so I felt that a new challenge was needed.

My friend Stan White had suggested a day out to see Susan and Geoff Davis compete at Carrock Fell and, while competing at Alnwick, I met up with Geoff who suggested I should give the fell race a try, as long as the weather was not too bad. Geoff and Susan very kindly arranged all the kit I would need: basically I just needed to turn up with my running shoes.

So the day arrived and I set off with Stan at 8:30am under grey and ominous skies, having arranged a ride up to Carrock with an experienced fell runner, Stuart Scott, who was a great source of information regarding what I could expect to encounter on this run. He helped reassure me that I would not get lost on the fells – something I was actually quite worried about, lol. He also explained that I would be running to the top of Carrock Fell and then on to another peak called High Pike Fell, and then back down to the finish, in total about 5.6 miles.

The sky started to brighten as we turned off the A66 and made our way up to Carrock Fell and I was able to see what I was expected to ‘run’ up. Having grown up in Cornwall, the highest point I had walked up was Brown Willy, all 420 meters of it. Carrock Fell is 661m and High Pike is a little lower at 658m. They both looked big and steep and Carrock Fell looked especially daunting.

I met up with Susan and Geoff who helped get me kitted out, explained a little of what a fell run entailed and how I should approach the run. All information was gratefully received although I was still a little apprehensive that I was up to the task!

I made my way to the information centre where, for the very reasonable price of £6, I was given my race number, 187, and a short while later I was at the start line with the rest of the runners, who all looked exceedingly fit and capable, unlike myself who was starting to feel like a fish out of water. While waiting for the start, I was introduced to the oldest runner attempting this race, Chris Lates a very spritely 82 years of age! I can’t imagine being able to run at 82 let alone attempting a Fell race: incredible achievement. 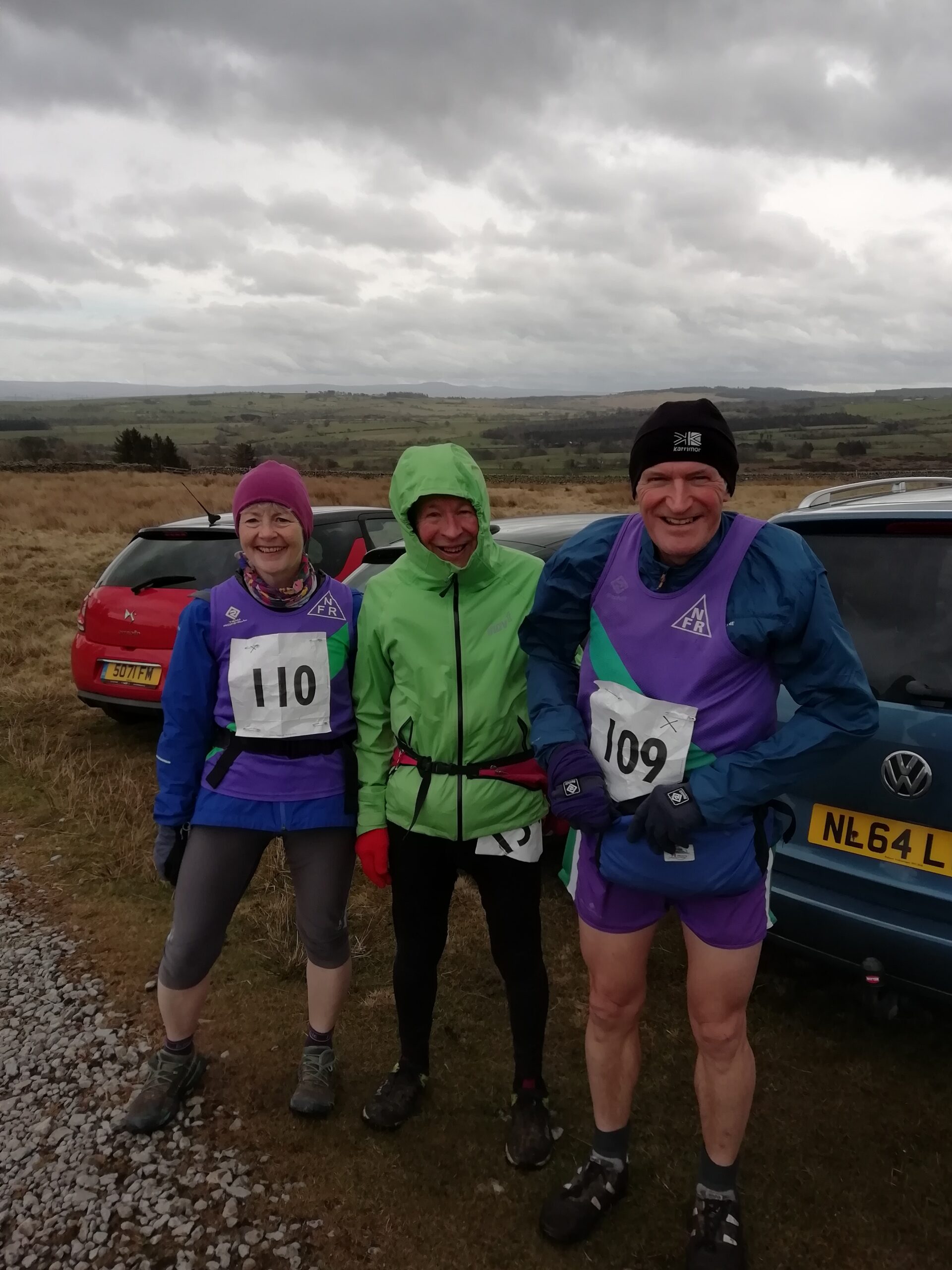 And so the race started and off we went. I had no idea what sort of pace to set other than slow and steady and to try and keep Susan in sight. The race at the start was flat but boggy which caused me some issues as I didn’t want to get my feet wet: both of my shoes had holes in them and I was hoping to try and keep my feet as dry as possible. I have no idea what I was thinking of… in my defence I think it was nerves!

So as I tried to keep up with Susan, no easy task, and keep my feet dry, you can imagine my surprise when I was confronted with a stream to cross. The other runners were wading across and I had no other option than to join them. The stream came up to above my knees and was cold, very cold. I no longer worried about keeping my feet dry.

After this, the ground started to rise and the ascent of Carrock Fell began. I would like to report I gambolled up it like a mountain goat but that would be a lie. At first it seemed ok but it just went on and on and it became a case of just putting one foot in front of the other and try and regulate my breathing. The summit seemed to take forever to reach and it was amazing to see all the other runners stretched out in a line as they ascended the fell, some a long way in front. Eventually the ground started to change from peaty soil to stone and the summit came into view and that’s when I started to feel the wind. It was really windy, with gusts of 40-50mph but what a view: once I reached the summit and gave my number to the official at the check point, I had planned to take some photos but I was now aware that if I stopped I might not start again so I started down and across towards the next peak, High Pike, which consisted of bog, lots and lots of bog. There was no trail to speak of so I just ran after the other runners and hoped they weren’t lost. We started to ascend up to High Pike, which after Carrock felt a lot easier, but the wind was really strong. I eventually made it to the peak where more marshals were present, and Stan was taking photos. A big thank you to all the marshals who helped out on the day, helping to lift the spirits and encourage the runners.

From the summit of High Pike there was a long and, for some runners, a fast descent down to the finish line. I took a little more leisurely approach to the descent and still managed to twist my ankle. It was nothing too serious but it made me aware that you had to be careful and concentrate on where you were putting your feet. Finally I made it to the finish line in one piece, slightly wet and cold but with a great sense of achievement, my first fell run completed. I thoroughly enjoyed it: amazing views, amazing runners who must all be a bit bonkers but in a very nice way.

I will definitely be fell running again.

Then it was off to the presentations and for tea and cake. I am very happy to report that Geoff and Susan both finished first in their age group as did Chris Lates who won the over-80s category. Incredible!

At the presentation a poem was read out which I believe is traditional at fell runs and which I would like to present here as I thought it was very touching and relevant to the times we find ourselves in.

Lucky are we,
No bombs here,
No need to flee,
Free from fear.

Give our thanks,
Our fells are safe,
No Bloody tanks!
Free to race.