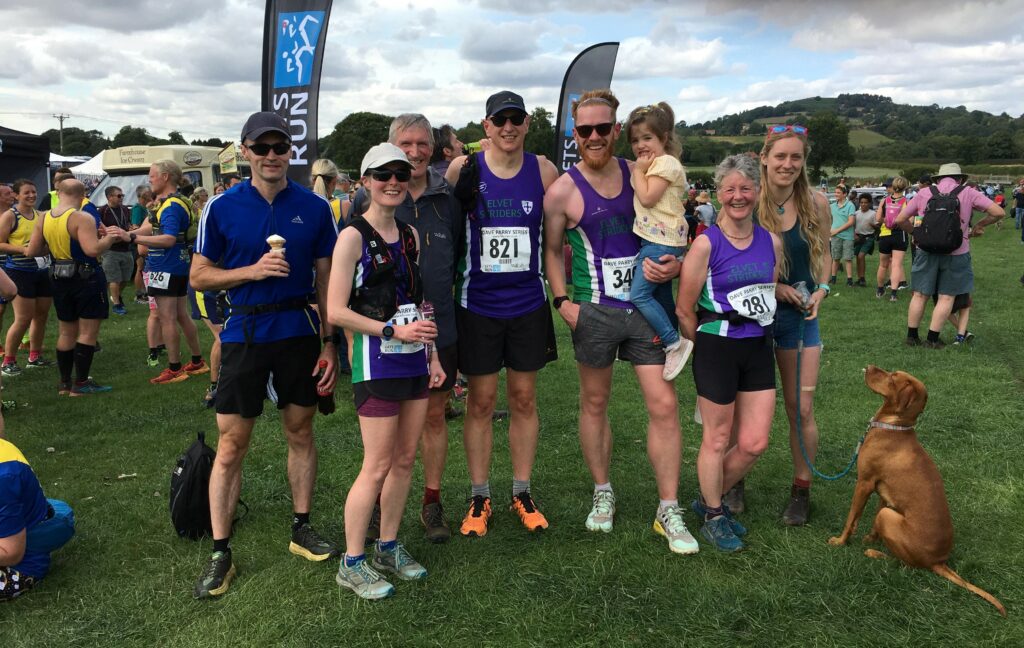 A Facebook post from Geoff Davis the day before piqued my interest in this race. It is part of the Elvet Striders Grand Prix Fell category. Sadly, these races have not had a huge take-up from Striders, so I thought I would give it a go, and at only “5.5 miles” it couldn’t be too much of an ordeal. And of course I could get myself 15 points in the GP, as I think I told a few people. (It later occurred to me that although Geoff has recently passed an age landmark he still counts as an over-55 this year, so 14 points it would have to be.)

Osmotherley sits on the western edge of the North York Moors National Park, about an hour’s drive from Durham, right at the bottom of the slopes which lead up to the moors themselves. The show ground is in a farmer’s field just south of the village, with ample parking. The race only costs £6 to enter, but the sneaky hosts, being from Yorkshire, charge you a further £6 to get in before you can find your way to the race registration tent. Still, for that you can also see the various exhibits and competitions, including horse and dog shows, vintage tractors, a brass band, and many stalls and catering outlets.

I was joined at this race by Geoff and Susan Davis, Emma McCabe, Barry Kirtley and family, and Graeme Watt, with Fiona Brannan as cheerleader. About 100 runners, including a large contingent from the local Thirsk and Sowerby club assembled at two o’clock on the grass on an increasingly warm afternoon, and after a countdown we were off. 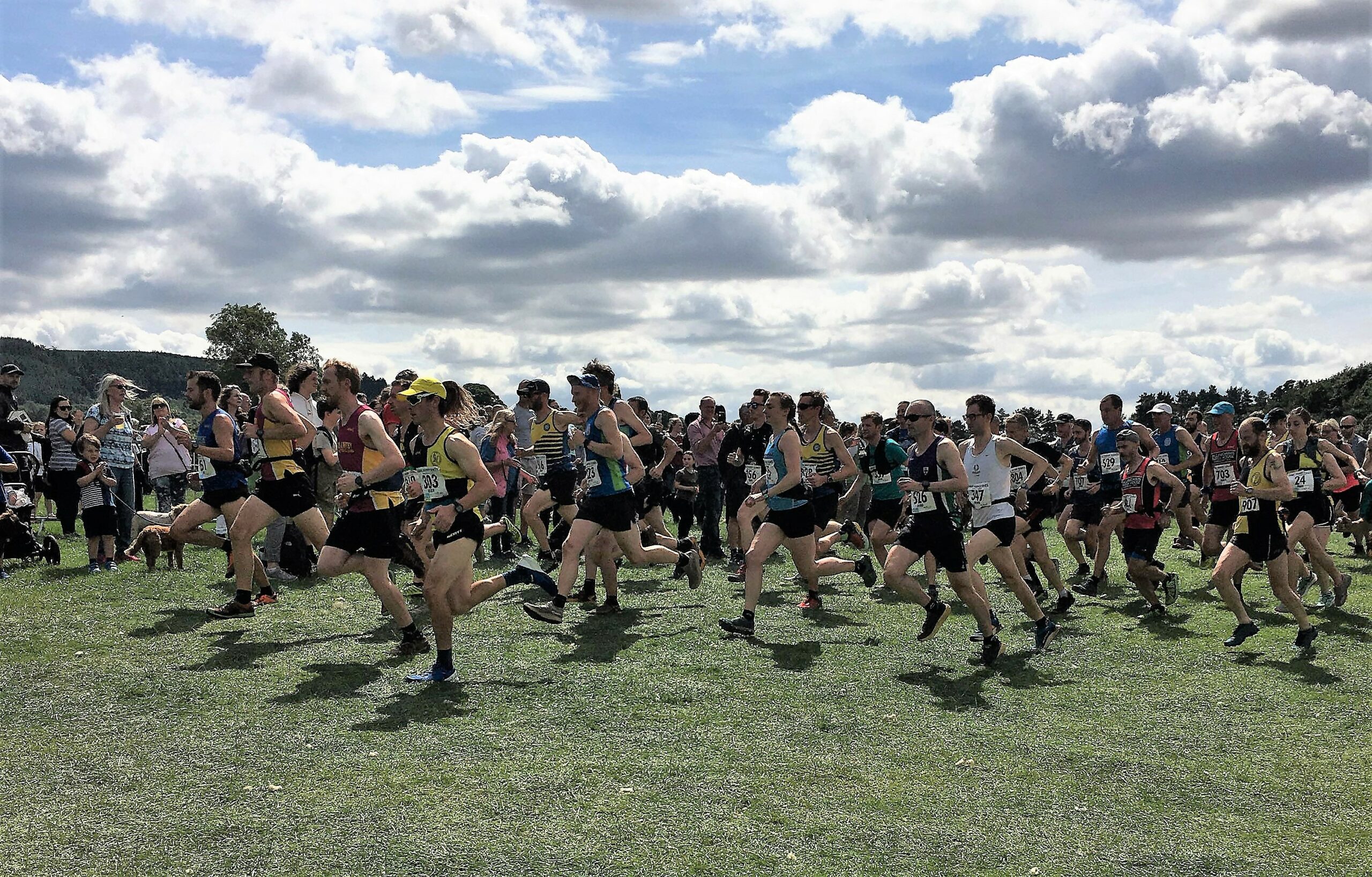 An easy start along a short road section allowed the field to spread out before heading uphill into the grounds of Thimbleby Hall and some lovely wooded trails, giving some welcome shade. As we passed a small reservoir, the route began to climb again, gently at first, but then quite severely up a stone-flagged path through bracken, where mere mortals like me need to drop down to a weary walk, while being buzzed by the many insects.

On reaching the open moor at Square Corner, the route levelled out for a while which allowed a steady pace to be maintained before the climbing started again on the ascent to Black Hambleton. This ascent meant that I returned to a mixture of walking and running, but it is mercifully short, and I never had the feeling that I wouldn’t get there. The views across the Vale of York improved as the climb progressed, on the few occasions that I lifted my gaze from the stony track. Much of the section was an out-and-back, meaning that I got to see some of the race for places at the sharp end of the field. Fantastic speed and balance from those athletes! I was just pleased to reach the point where the course diverged before the leaders came hurtling back.

After a short plod across the heather to round the trig point, I was told that it was downhill all the way. A slight exaggeration; although the descent off Black Hambleton was an exhilarating downhill charge, where I could shout some encouragement to the runners who were behind me, there followed a moorland traverse on a rough track which included yet more climbing. This came as a bit of a shock, but I resolved just to take it steadily until the downward slopes returned.

The final mile was a blast through woods, fields and lanes to the finish, and I managed to pick up a few places to finish what was a very enjoyable race. It was well-organised and there were lots of friendly, encouraging marshals along the route, and tons of prizes. Although FRA kit was mandated, including route maps, there was no chance of getting lost, and after so much dry weather the trails were bone hard. 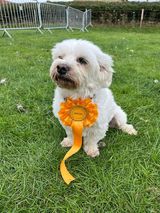 Congratulations go to Graeme and Geoff, who took age-group prizes of LETS RUN vouchers and beer. (Who knew that Rab, the outdoor clothing company, also did beer?) Also congratulations to Barrie’s daughter’s dog who won a prize in the dog show.

A particularly good thing about this event was the quality of the ice-cream available. My raspberry ripple cone was most welcome after such a warm race, which I recommend very highly, particularly to those who might be a bit afraid of dipping their toes into fell running. This is not too long or too steep or too remote and is a great introduction. 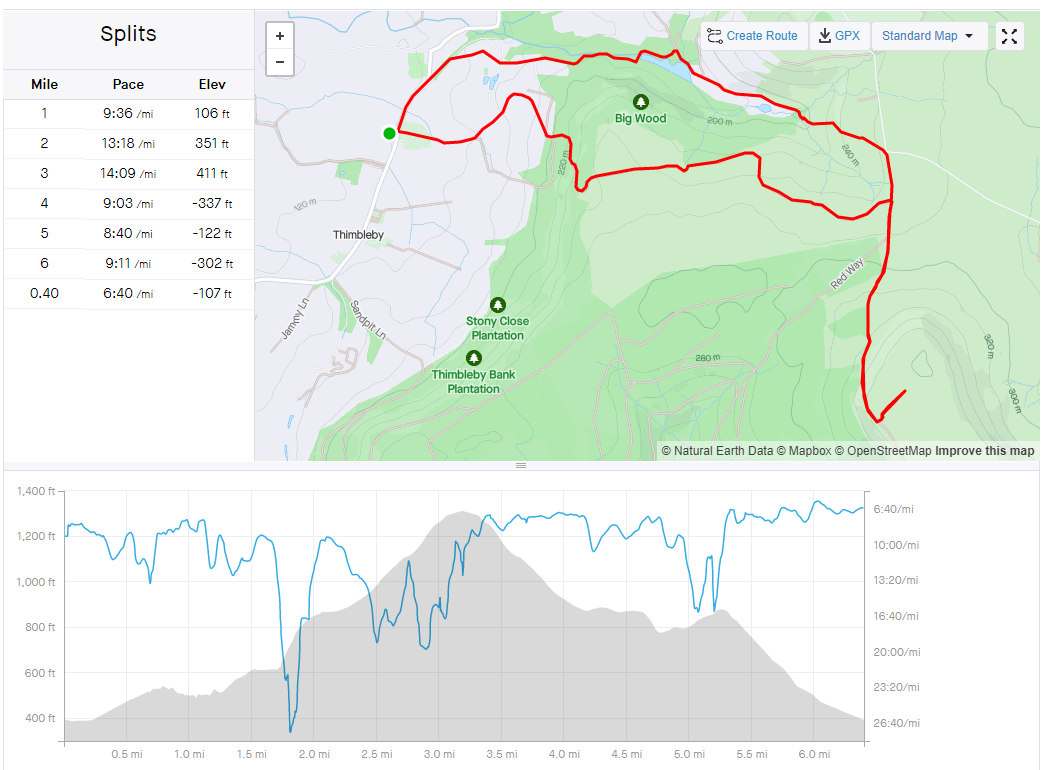