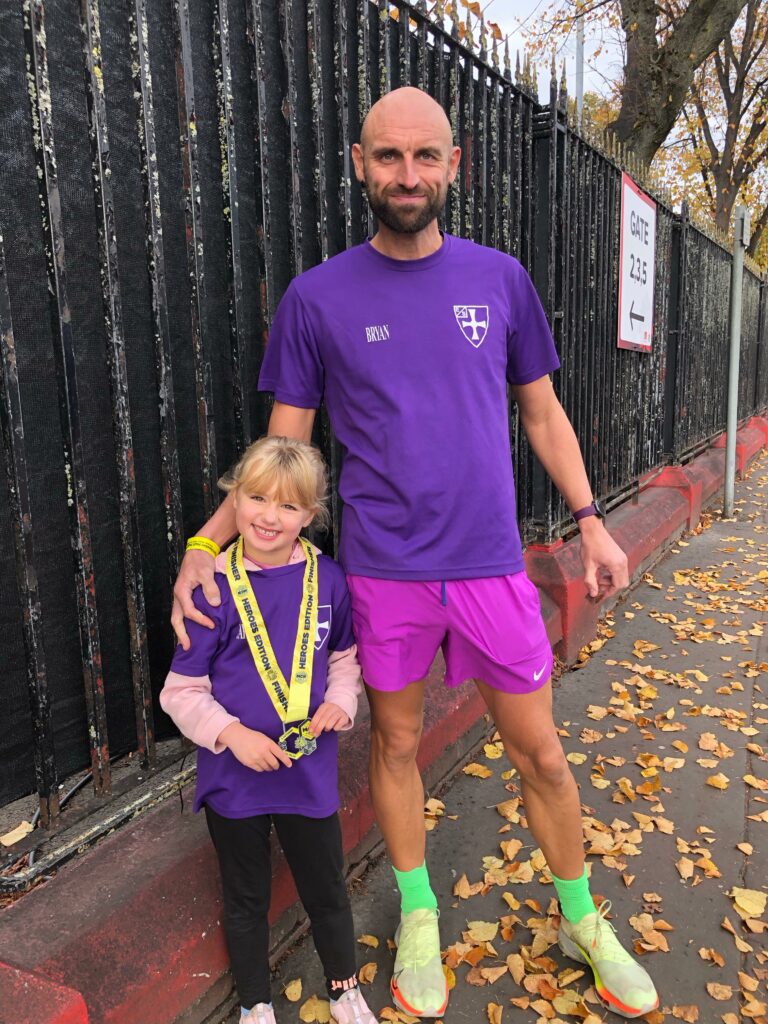 The Manchester Half-marathon on Sunday 9th October was my main race of the year and had it in my plans for a big PB after hitting a 4 minute PB in October 2021 of 1:19:01.

My GNR in 2022 was a 6 minute PB for the race of 1:20:14, but personally I felt disappointed running the race as I didn’t feel I had any energy from 6km and it was a battle to the finish line.

The few days leading up to the race did not go great with train strikes and on Friday morning found out most trains from Durham to Manchester on Friday night had been cancelled so it was looking highly unlikely that me, Jude and Layla were going to get there.

The saviour for us were Marc and Sarah Watson who offered to take us and bring us back as Marc was doing the race.

On the Saturday morning my parkrun at Peel went great, finishing first with a time of 17:41 and never having to push myself finishing a minute before the next runner.

On Sunday I managed to get to Old Trafford 90 minutes early so had plenty of time to chat to a few people and then saw Mark Kearney, so did a little warm up with him before heading to the race line on a lovely autumn morning. We both managed to get near the front and we were off at 9am. I had in my mind of beating my PB and knew what I wanted to achieve.

The first 5km was nice and relaxed and I followed a runner from Sunderland down to Deansgate and then back the way we came. I managed to pace myself well which a lot of people know I struggle with, and was hitting my 3:30/km and went just under 17:30 for the first 5km.

Up to 12km I managed to stay with a group of 5 other runners and stay at my 3:30/km pace. At about the 7km point near Old Trafford I managed to see Jude and Layla; Layla was so happy that I was able to give her a high five and certainly made me more determined to keep my pace.

At 10km I managed a PB with a time of 35:02 and knew I was on target and well on track to get under 78 minutes. If I could somehow keep going at the pace I was, I had a chance of 74 minutes which kept floating around in my head even if it was unrealistic to make such a massive jump. 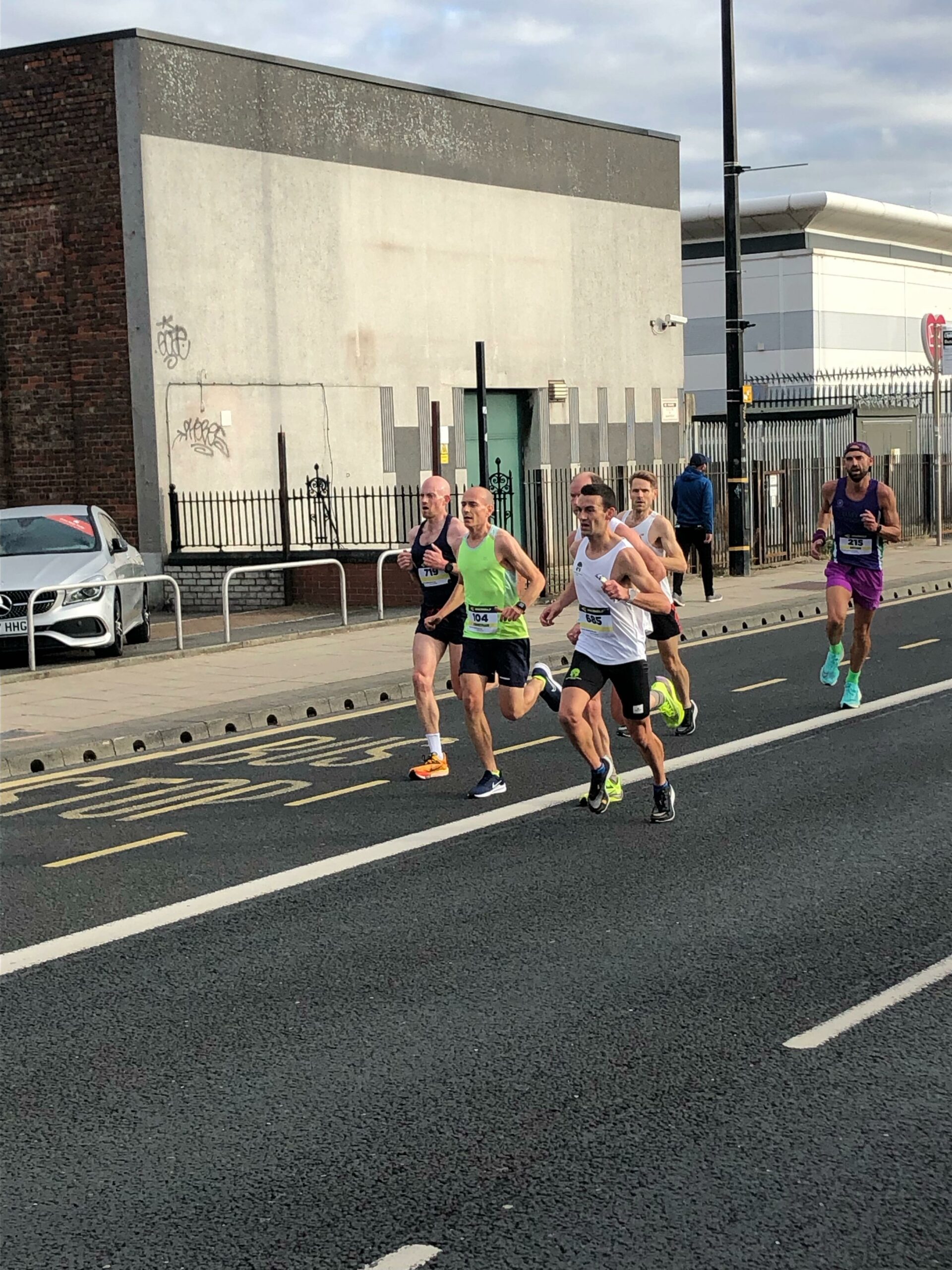 Through 13km to the end of the race was a real battle with me losing the group of runners I was with, the three leading woman had also overtaken me and now I was mostly by myself with a couple of runners overtaking me, it was a real battle in my head to keep going at a good pace and keep on track and I was talking to myself a lot to keep going and achieve the PB I wanted.

Heading back into Manchester for the last 3km was the toughest during any of the races, for no other reason apart from I was slowing down and couldn’t keep my pace, I had dropped to 3:50/km pace and knew it was going to be a battle to get to the end. The course was still flat but my legs were just getting more and more tired.

Once I got to the finishing straight I could see the sign and the time, this is when I had to up my pace and I was constantly checking my watch. I knew I was in the 76 minutes category and it was going to be a push to stay in the 76 minutes with the seconds seemed to be going faster than I wanted. The last 200 metres seemed to be the fastest I had ever run and somehow I managed a personal victory and clocked 1:16:59 and was the happiest person alive. For the majority of the race it was probably the best-paced run I have ever run and felt proud of what I had achieved. Wearing the Elvet Striders vest makes me feel so good when running and I am so happy to represent the club who have so many fantastic people in it and the three of us have made so many friends through it. 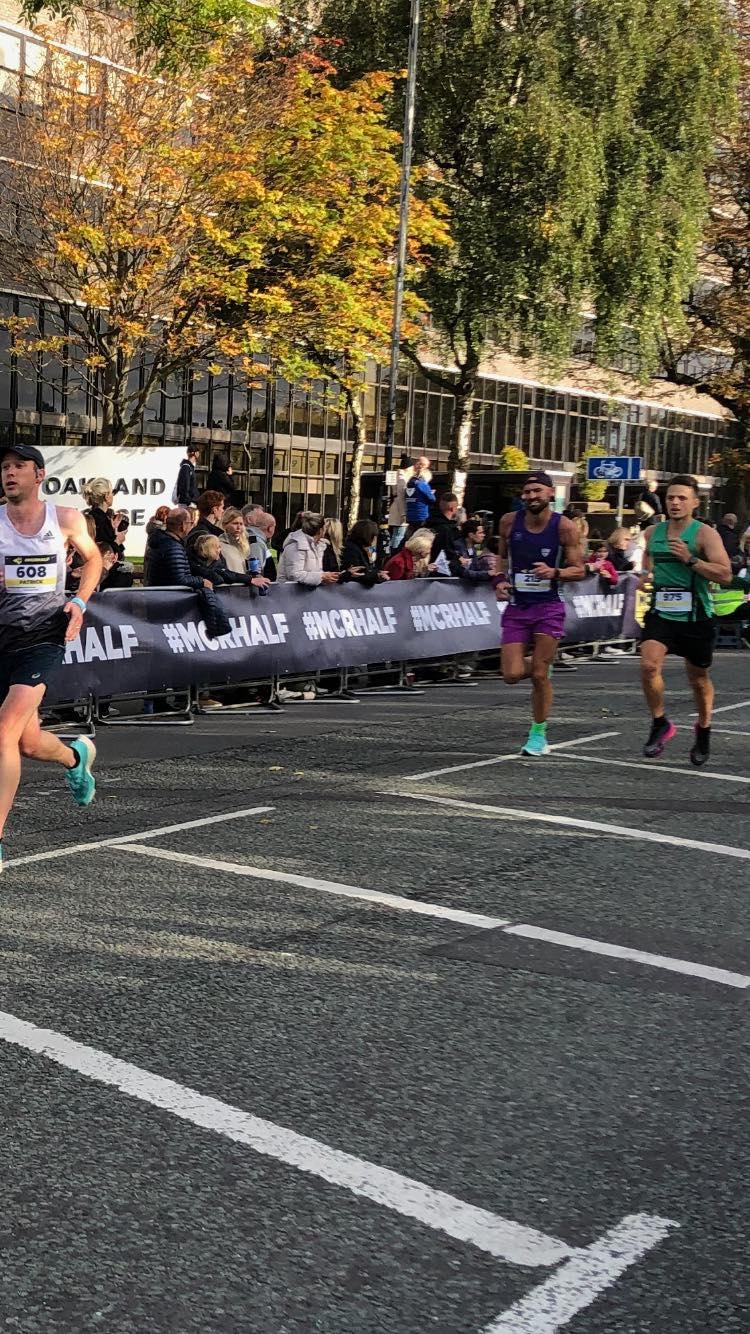 Also seeing Mark Kearney at the end and seeing he got a PB of 1:13:16 and coming in the top 40 was amazing, then being met by Jude and Layla who are my two biggest supporters was the best feeling in the world.

Full results can be found at Sporthive.