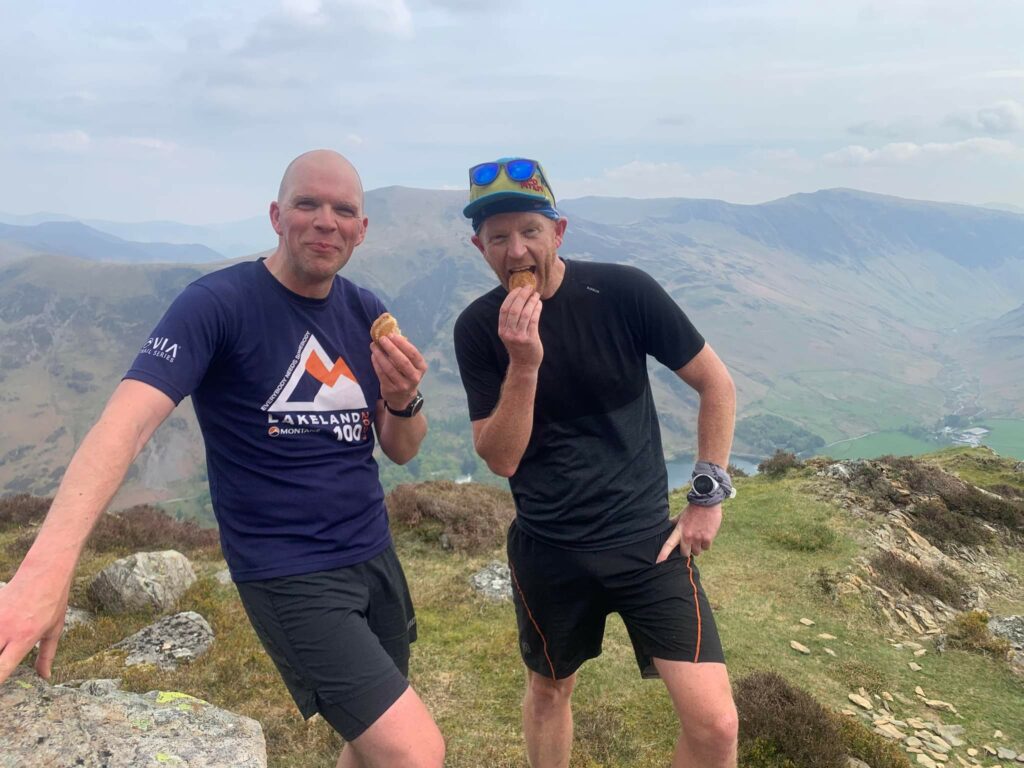 This is a route I’ve wanted to have a go of for a while now but at 30 miles and around 12,000ft of ascent it’s hell of a challenge.

This year I’ve been back in training for the Lakeland 100 and as July approaches my training has stepped up to include some big days out on the fells. Luckily, there’s a brilliant group of people that are taking on some amazing challenges such as the Bob Graham Round (BGR) or Joss Naylor Challenge and so supporting these have been built into my training plan.

On this occasion the plan was to help Nina Mason on her BGR but she unfortunately had to postpone due to Covid. So with a Lake District sized gap in my diary, the plan changed and I decided to give the Tea Round a bash. I was initially going to do it on my own for fear of it being too big a challenge and I didn’t want the pressure of having other people with me if I decided to drop at any point. But then I decided that it was too good a challenge not to share with others so I contacted Stuart Scott who is always up for a big day out and Eric Green to see if they fancied joining me. Of course they did, and then Queen of the Hills Elaine Bisson was recruited to complete the quartet.

We set off from Co. Durham very very early so that we could make the most of the day. It was great to see Nina at the doors of George Fisher to see us off, such a shame it wasn’t on her BGR we were meeting her for though. Nina borrowed us her copy of the Tea Round map which was very kind of her, we would definitely look after in and not destroy it. 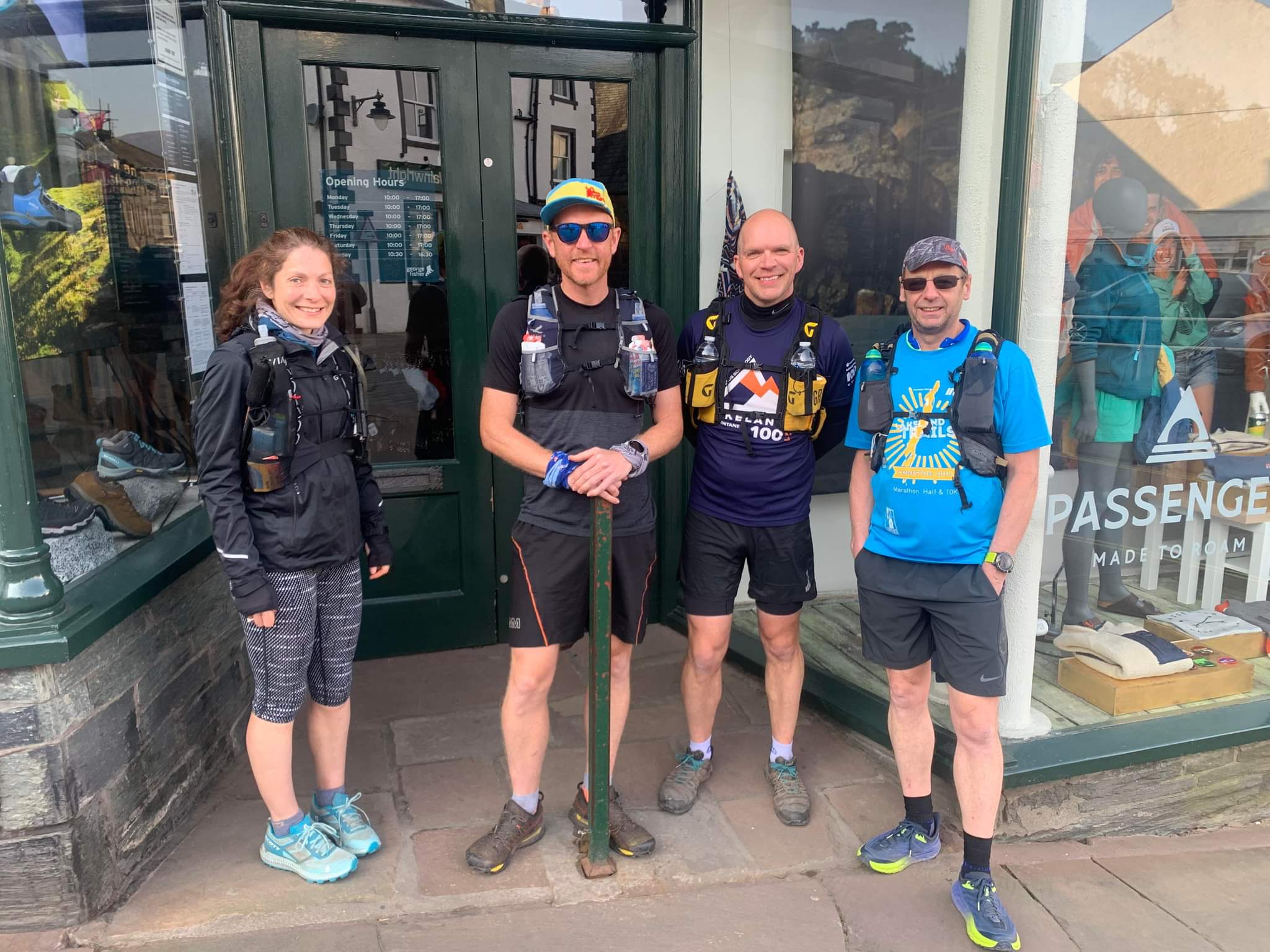 Just after 7am we set off at a lovely easy pace. It was a beautiful morning and the weather was mild but with a slight breeze. We eased our way up the valley towards the first peak of Cat Bells. It was great to climb it and see loads of runners who were competing in the Silva Lakeland 3 Day event. I think I remember getting wrong off Elaine for mentioning that I’d quite like some chips here too – it was far too early to be thinking about such things apparently!

From Cat Bells we made our way across the ridge and into the Newlands Valley to the next climb up to Robinson. In the valley it was very warm but the on the tops there was a stiff wind blowing that had quite a bite, but was manageable. From Robinson, we dropped down what at first was a grassy ridge towards Buttermere. Following a fence line we picked up a trail that dropped sharply and turned into a very very steep descent until we finally reached the road in the valley.

The next peak is High Stile which is a solid climb of over 2,000ft which seemed to take a long time to complete. We decided to take a break before the rocky summit where each of our food choices was a great display of what makes ultra fell running so good – pizza, sausage rolls, pies, crisps, chocolate – delicious.

Feeling refreshed and refuelled we cracked on to the summit and not before long we were heading to Red Pike and down the scree descent back into Buttermere with just a few slips on my bum turning it a lovely shade of red.
In Buttermere we took the opportunity to use the shop/café to restock our drinks but whilst in the queue it was decided that maybe it would be appropriate to stop for a pot of tea. It was the Tea Round after all! 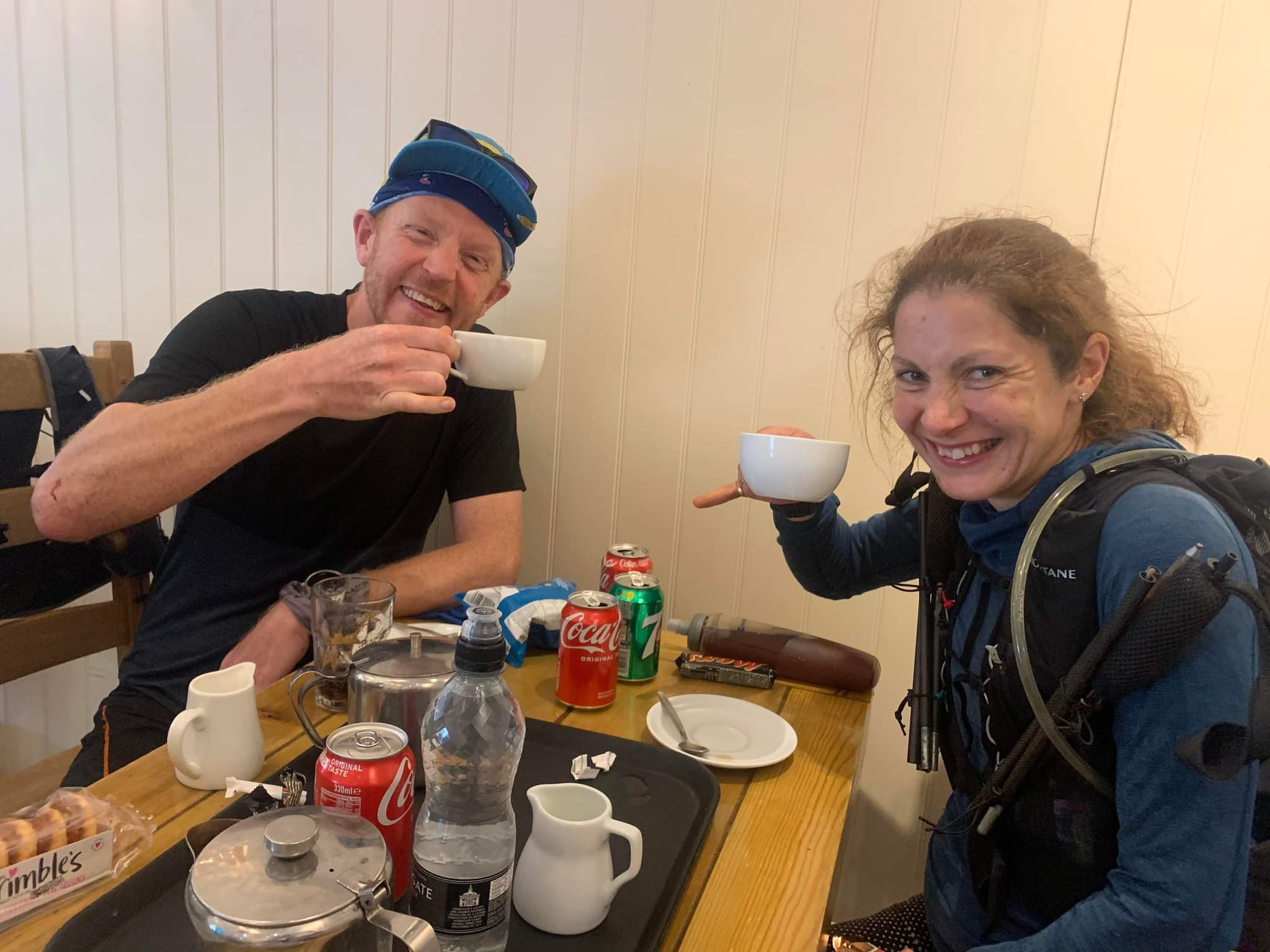 After a lovely stop for tea and other goodies we set back off for the next peaks of Hobcarton and Grisedale Pike. This is a long and quite uneventful climb and were ticked off without too much fuss. At the top of Grisedale Pike we caught sight of a pair who we’d been told had set off before us on the Tea Round. Our collective competitive spirit had kicked in and we made the most of catching and passing them. It’s not a race but it did feel good to know we were moving quicker than someone else.

The weather turned here and we used our time on the return from Grisedale into the valley to put on extra layers as it was getting windier and colder. The climb up to Eel Crag was quite tough and was more of a scramble towards the top which Stuart and I really enjoyed. We made short work of the long plateau across the top as the wind was wild and made our way swiftly to the final few peaks of Causey Pike and Rowling End. 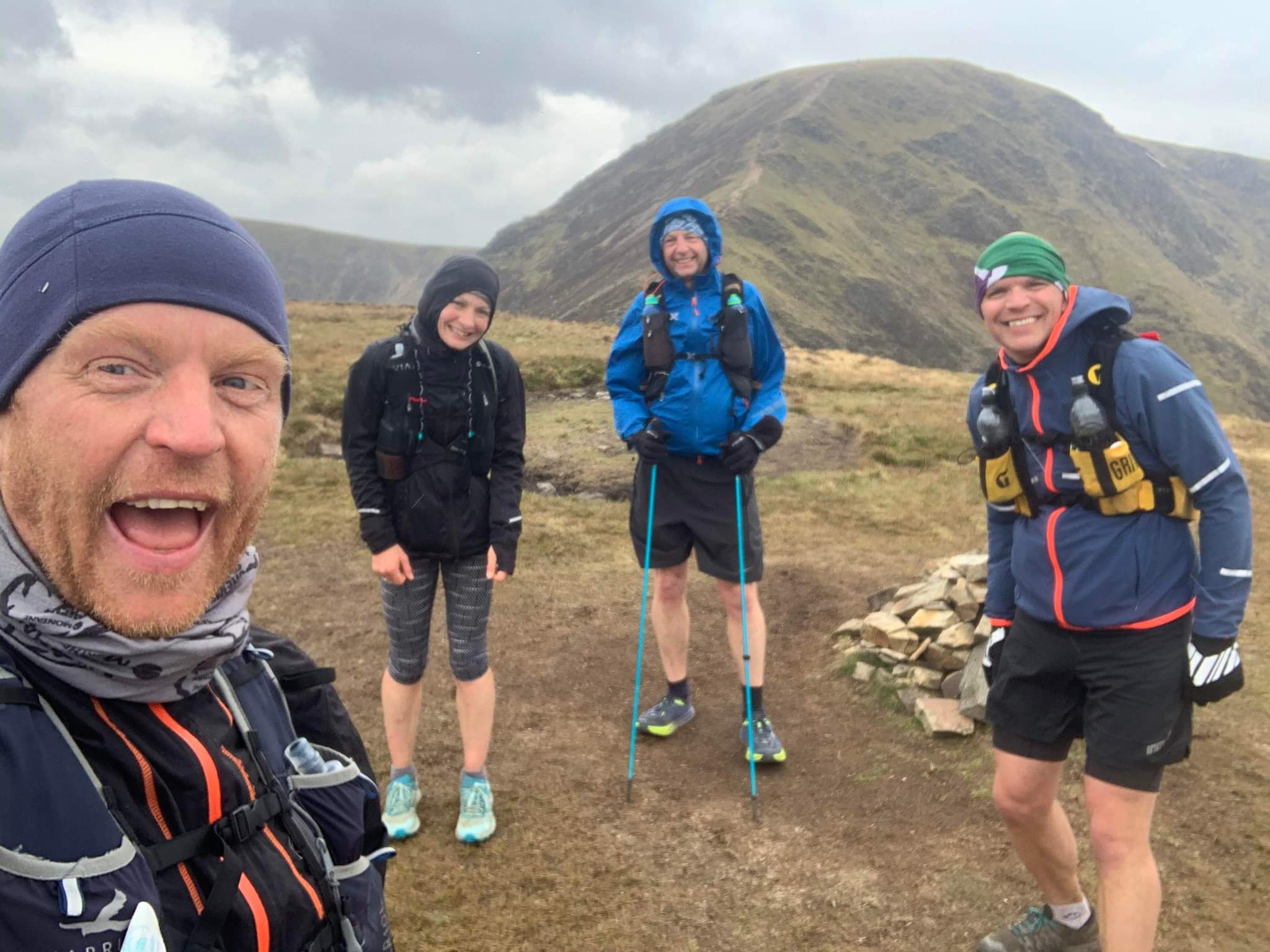 Rowling End is an out and back before we cut off just beneath Causey Pike and down a very faint line through some very thick heather into the valley to get to the final peak of the round, Barrow. From here we dropped down onto the road for the run back through Portinscale and back to the door at the George Fisher shop in Keswick.

We completed the round in a very leisurely 10hrs 50mins where we met Nina who came out to great us back. The less said about the state of the map we borrowed the better, I think. We then headed back to the car via the chip shop which I’d been dreaming about pretty much since we set off. They were delicious and a great way to end a wonderful day. 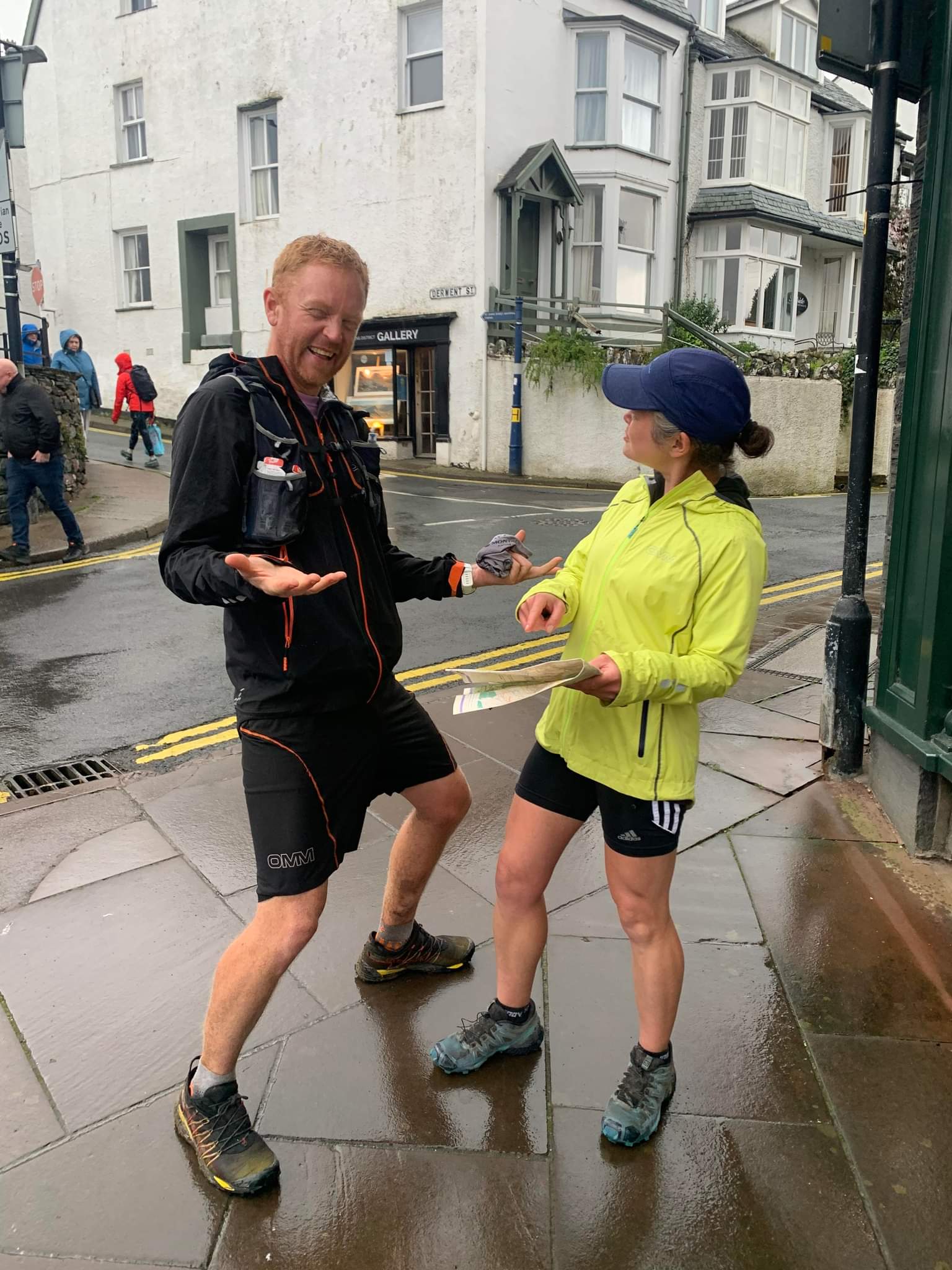