I think that if you haven’t thought this in at least one race or run, you’re probably in a distinct minority. That I was only a few minutes into this race when the thought passed through my brain didn’t bode well, but then I was plugging my way up a 45-degree grassy slope in a crocodile of other competitors at the time, heart rate just under threshold and my hands on my knees to help me take the next step.

One step at a time and keep battling on was all I could do; I was determined to make the most of this opportunity to be out running the fells in a mid-week race.

For a lot of road races, people talk about courses ranging from “fast and flat” through to “undulating”, which itself covers a multitude of possibilities. Races listed by the Fell Running Association (FRA) are given two-letter codes. The first denotes how steep it will be: C, B or A. There are technical definitions, but broadly that’s “fairly runnable”, “hilly” and “side of a house” respectively. The second indicates broadly how far it is – S(hort), M(edium) or L(ong). This was AM, with the race advertised as being 8.1 miles and 2,700 feet of climb, or 13km and 825m in new money. 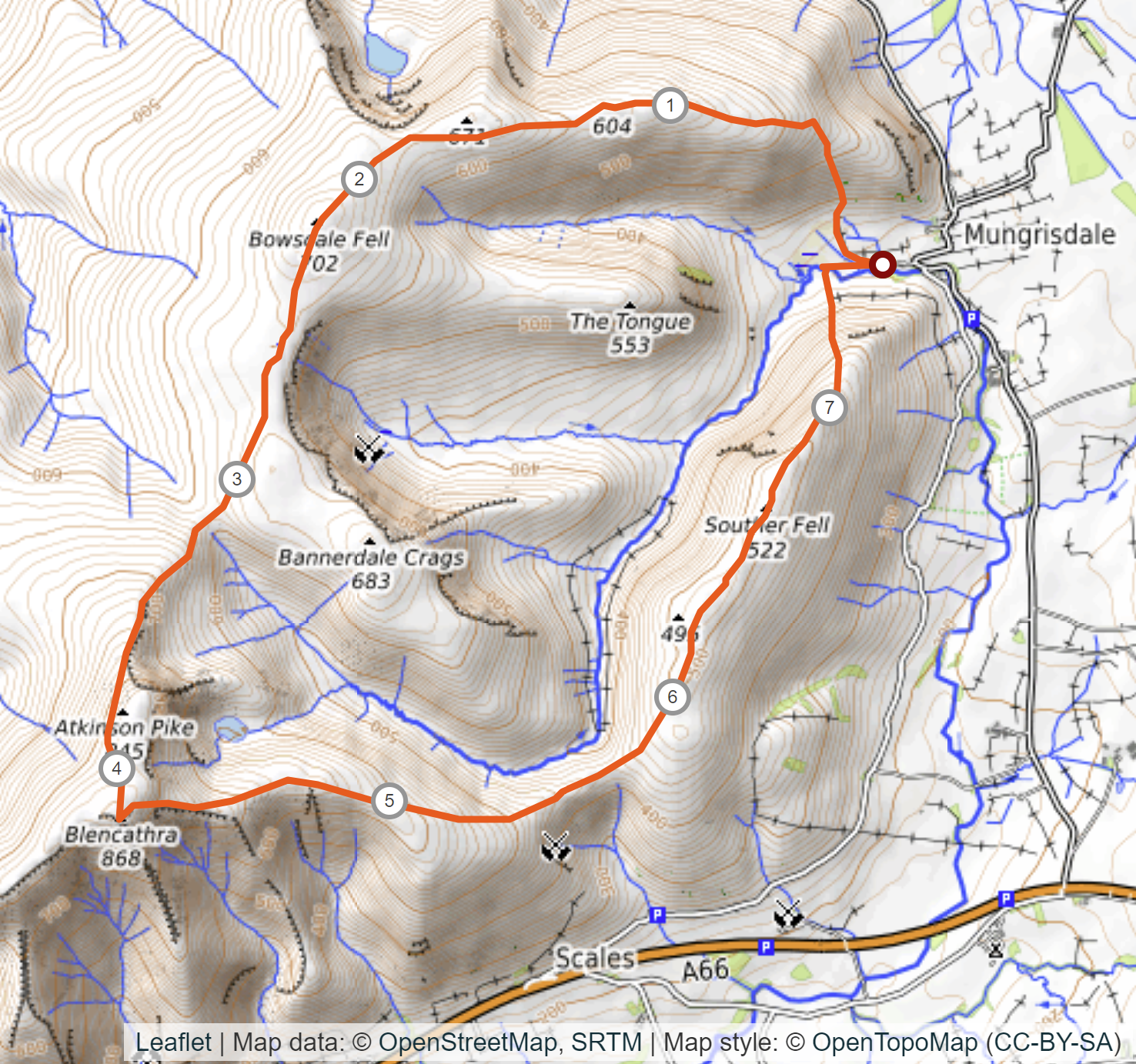 Safety is the prime consideration, the Race Organiser reminding everyone before the start that in the event of an incident, there are more important things than the race and to look after each other. It’s a perfect sentiment that typifies this branch of our sport. As normal in this category of race, all runners had to carry FRA mandatory minimum kit – full waterproofs, hat, gloves, emergency food, route map, compass and whistle – with spot checks being performed at registration and the start.

Starting at the fell gate in the village of Mungrisdale, the route formed a single loop: up onto the ridge of Bowscale Fell, along to the summit (checkpoint 1) and then two further checkpoints on the summits of Blencathra and Souther Fell before a steep descent back to the start. There was a cut-off time of 55 minutes at the col after checkpoint 1; my only race plan was to beat the cut-off. After that, I’d just do my best and see where I ended up.

Nominally, route choice was free after the first marshal on the ridgeline. In the event, people took a few different lines up to the marshal and after that there weren’t many different lines that would particularly benefit anyone – it was more of a procession. If the cloud had been down, that could have made things a whole lot more interesting on the navigation, especially from where I was further back in the field where we were more spread out and could lose sight of the person in front.

Apart from the climb, the other feature of that area of the northern fells is the bogs. Wherever it was flatter or in a hollow, the peaty ground was holding a lot of water, even though there hadn’t been a huge amount of rain in the preceding few days. As you’ll discover, that became relevant later.

So, I left you at the first turn on the ridgeline… even reaching that point, I was still finding the gradient too steep so was still walking until I’d crested the first subsidiary summit. I managed a bit of a gasping trot on the slight downhill but was soon walking again up the next rise, the pattern continuing until I’d cleared the summit of Bowscale Fell.

The drop from the summit was a blessed relief and I managed to put in a mile of stronger pace over the col to the foot of the Foule Crag climb. The field had opened up by that point; I wasn’t catching the bloke in front and whoever was behind me didn’t seem to be making any progress either. I popped a couple of jelly babies on the march up, not for the calories but to test a theory about there being a psychological benefit; I certainly felt better for doing it.

Just before reaching Foule Crag itself, I could see the line of runners ahead branching off the main path onto a trod to the right across the scree slope. It’s never a given that the person in front knows where they’re going any better than you, so I quickly checked the map as I approached and could see the line was more direct and would avoid a bit of climb over the top of Atkinson Pike – so onto the scree trod for me. The gradient started to ease a bit, so I was able to get a bit of a trot going as I approached the summit of Halls Fell. I passed a pair who seemed to be running together, the Keswick AC runner in front guiding his less experienced companion round the course; I added some words of encouragement as I inched past them.

The marshal sent us round them and over the summit ring trig point (if you haven’t seen it, Google it!) and as I made the turn, I had a stunning view south across the Glenderamackin valley towards Clough Head and the Helvellyn ridge.

That was my “why” I was looking for earlier.

Desperate as I was to stop and take photos, there was a race to run and I turned east to start my descent. The first section was a bit exposed for my liking, with a steep drop to the right, so I took it steadily at first; this was no place for a mis-step. Very soon, the ridge widened out and there was a chance to build a bit of speed safely. I started to catch the people ahead of me and that gave me confidence to keep doing what I was doing – arms out for balance, watching the ground ahead, short fast strides, relaxed. This was the bit I could do!

As I crossed Mousthwaite Combe, I put in a stretch at what would have been sub-5k pace, the slight descent and grassy ground really allowing me to open up my stride. That all came shuddering to a halt as a hit the next uphill section, which was the third main climb of the day up Souther Fell. I popped in a couple more jelly babies and although that seemed to help again, some of the people I passed coming down were reeling me back in. Souther Fell is an easier gradient so I got a bit of a run going over the undulating top of the fell and before long I was passing the cheerful, encouraging marshals at the final checkpoint and starting the last descent. This was even steeper than coming off Blencathra but my short steps and confidence took me past half a dozen more as I battered down through the bilberries.

The final obstacle was crossing the River Glenderamackin and, to get to it, a short stretch of flat ground. Do you remember I mentioned how the ground was holding onto a lot of water? Like the sections on the tops, this bit was rather soggy and I was planning my foot placements and route to try to stay on solid ground. I so nearly made it… With my second-last stride, my right foot found one of those “fake” firm bits – you know, where it looks solid until you’ve put your weight on it and committed – sank in up to the knee and my momentum took the rest of me full-length into the soggy, peaty mess.

Cursing a little(!), I extracted my leg and headed for the river. The marshals were very good and didn’t snigger openly as I chose the lower bank to drop into the icy water.

I didn’t look around but my splat had cost me a few seconds and I knew that there were 3 or 4 other runners near me as we hit the final few hundred metres of track back to the start.

“Sprint finish?” one of them quipped.

“No way,” I replied. I meant it, I didn’t feel as though I had the energy left. Still, I was determined to give a decent account of myself and pushed as hard as I could, albeit expecting to have them all sweep past me on the run-in…but the onslaught never came.

In the end I finished in 1 hour 40 minutes and 29 seconds, 131st finisher out of 171 and first (OK, only) Strider home! At a road race, I would normally expect to be around mid-pack or slightly higher, but that’s normal for a race like this. Most of the people taking part are what I would consider to be the sharper end of the field, but I don’t run races like this for a high finish position or PB pace (just as well!).

The race organisation by Eden Runners was top-notch, very slick, and a friendly crowd as usual. At only 5 quid to enter (entry on the day only) it was a bit of a bargain too. No medal, no t-shirt, just some peat stains on the vest and memories of the glorious views.

The sun was setting as I drove back to our holiday accommodation near Keswick, bathing the fells in a warming light that enhanced their curves and wrinkles. What a fabulous way to round off a superb evening.